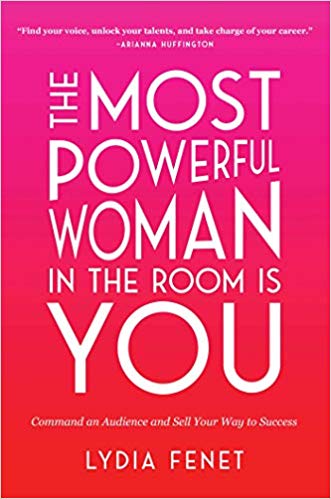 I had not heard of Lydia Fenet when I first saw this book as I was looking for something to read on the plane to Seattle.

Lydia has been leading charity auctions for Christie’s for years and is now the Managing Director, Global Head of Strategic Partnerships at Christie’s.

The book starts with “The most powerful woman in the room uses the strike method” and relates to how Lydia begins each auction with a sharp strike of her gavel on the podium at an auction, and how each woman should develop her own “strike”:

Strike Method: An action or motivating thought to help center their thinking and move forward from a place of strength, to come into a moment like a woman who knows what she wants and is going to tell you how she is going to get it.

I haven’t quite settled on mine strike method yet, but I’m exploring. The book discusses heavily how she learned to tell a story about each item in the auction rather than simply presenting the dry facts – and that is a concept I always try to teach to my clients when marketing.

She also mentions how we need to tell anyone and everyone about our personal life goals since we never know who may be able to help. I probably don’t do this often enough, but it something I will be working on.

The book is filled with quotes from powerful women and here is one of my favorites:

Right after I signed the contract to be on a new show called Shark Tank, the producer announced he had changed his mind and was giving the lone female seat to someone else. Rather than accepting the defeat, I sat down at my computer and banged out a list of things I had succeeded at once someone told me I couldn’t. I ended the email with, “All the best things in my life happened on the heels of failure and I consider you rejection a lucky charm.” I suggested he invite both women out to compete for the seat. The next week, I booked a flight to LA and got the job. I’ve been a very happy investor on Shark Tank for ten years and just renewed my contract.

I got through the first half of the book in about 1/2 the plane ride, and finished it that evening in our hotel. It’s one I will probably at least skim through again, to reinforce some of the words since I find reading so fast, I don’t always have the full time to process some of the pieces of information that I want.