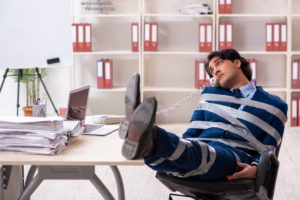 A lot of small businesses get it wrong. Is it an employee or subcontractor?

Just because you want to do it one way does’t mean that you’re doing it right?

I see a LOT of companies fall into this trap – this isn’t strictly marketing-related today, but if you’re running a business it’s something that you need to understand.

I will tell you up front that I am not a lawyer and I am not giving you legal advice – you will always want to check with your attorney when discussing any issues that may have legal implications.

What I have done is run companies, including ones with quite a bit of staff, so this was something we always had to be aware of in our hiring process. I also worked as CMO at a company with thousands of independent contractors where we had to understand the nuances.

I have quite a few people asking questions, both businesses and the employees or contractors, where it looks like they’ve got it wrong. Some of the businesses are doing it this way to get out of paying payroll taxes or all of the other headaches associated with timesheets and payroll in general, and I’ve also seen some that are doing things that are basically like holding the employee hostage (an example below). I’ve also seen some freelancers that are joining a company and the company is trying to misclassify them.

The nice thing is that the IRS has a lot of information about this issue; all you have to do is Google or go directly to IRS.gov and read up. Plus, if you need further guidance, they have ability to guide you on your unique situation.

What you see is that they look at three primary things relating to the degree of control and independence: behavioral, financial, and type of relationship.

Behavioral control is if the worker or the business has the right to direct and control the work performed – who has the right to do so even if they do not exercise that right. Who can decide where and when the person will work, what tools to work, where to purchase supplies and services, and the degree of instruction given or extent of training given. Are the when and how of getting the work done in the control of the individual or the business?

Financial control centers around whether the person or the business has direct control of the financial aspects of the job. This could be something like investing in equipment. For example, if a client provided me a computer to use while doing the work, this could be seen as financial control and an employment relationship. Independent contractors are more likely to incur these types of expenses themselves and build them into their quote. Opportunity for profit and loss can also be considered.

The type of relationship can often consider whether or not the individual provides services to the market. Independent contractors are generally free to seek out other business opportunities. One of the most common red flags I see is that a small business wants to identify someone as an independent contractor, but then they also try to lock them into a non-compete clause or a contract that prevents them from seeking other work.

The method of payment can also be a guideline. Employees usually get a set number of hours or amount of pay, even when it includes commission, on a set schedule, such as weekly or bi-weekly, whereas independent contractors are usually paid by the job, a flat fee, even when the total amount may be broken out monthly. The relationship can also depend upon how the business and individual perceive the interaction, whether there is the presence of a written contract although simply having a contract that stipulates “independent contractor” is alone not enough unless the three areas noted above are properly met.

How vital the services are to the business should be considered. If your company sells widgets, and you bring in someone to make widgets, that is likely an employee. If you bring in someone to consult with your group about widgets, improving widget processes, increasing efficiency, developing business and marketing plans, that person could more likely meet the classification of an independent contractor (although there is no reason that you could not hire them on as an employee).

She was happy with the arrangement and so was the business, but being happy today may not matter. And that’s where a business can fall into trouble. I once had a coworker who was classified as an independent contractor for several years. At some point, he became unhappy with that classification (or who knows what was the trigger that made him unhappy?), and went back and sued the company for the benefits such as taxes and ability to have vacation and insurance benefits. He won, and the company has to pay his back Medicare and Social Security taxes plus vacation pay for all of those years, switch him to employee immediately, and offer medical insurance. It was a hefty sum. And note, this is a larger company with enough employees that should have known better.

There was another client I was working with who was an independent contractor for a business and was ending that contract to expand her own business projects. When she presented this to the business, they withheld her final payment and forced her to sign a non-compete agreement before releasing those funds. As a single mom and needing that last payment to help with her new business, she felt like she didn’t have an option and signed the form, which said that she wasn’t allowed to work in her own field in her state for two years. She signed under duress as they withheld her payment. As we were discussing this, I urged her to speak with her lawyer, because she had some leverage here that she may be able to work with. Even though she had signed that contract as she was leaving, it may not be valid since it was signed under duress, and given the experience I knew from that co-worker above, she may have ability to go back and sue for back benefits, which would be a lot of money from the company … so they just might agree to revoke that non-compete after they were presented with the facts.

All of this is even harder when you’re an entrepreneur or small business, perhaps in startup mode, and you aren’t familiar with the guidelines. Working with payroll systems can be a daunting task and time-consuming, so many will default to bringing on everyone as an independent contractor. Reviewing the guidelines at IRS.gov can help you understand the difference and set up your staffing plans – or if you’re the freelancer set up your contracts and expectations – the right way from the start.